Many Rwandans are completely lost for words by the behaviour of Yoweri Museveni and his government. One would have thought that the Ugandan leadership – even in its endless provocations of Rwanda – still retained some sense of understanding that much as one may have a problem with his neighbour, still he has to make an effort to honour his part of a pact – especially when it is between two states.

But once again the Ugandan president and his minions have demonstrated there is no bottom to how low they can sink. For the past few days the group in Kampala has completely dishonoured the terms of the Memorandum of Understanding between Rwanda and Uganda, signed in Angola last Wednesday – with the presidents of Angola, DR Congo and Congo Brazzaville looking on.

Paul Kagame and Yoweri Museveni upended their signatures on the document; the world witnessed the event, and it saw copies of the MoU – which specified clearly the obligations of both parties that among other things include: 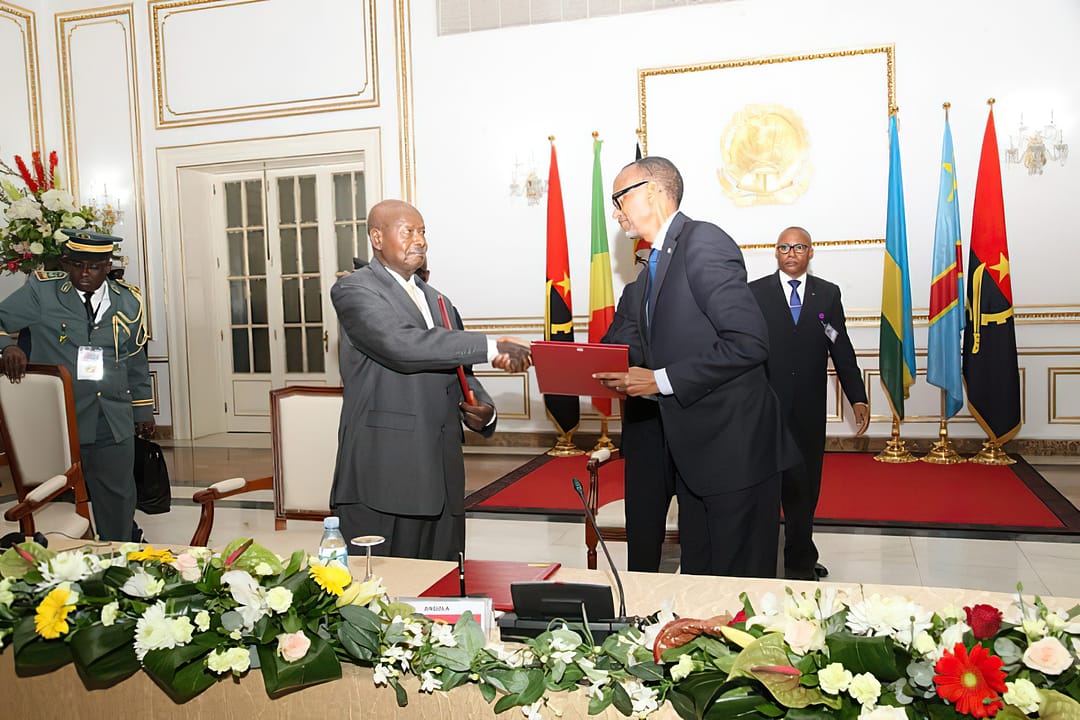 Refraining from actions conducive to destabilisation or subversion in the territory of the other Party and neighbouring countries, thereby eliminating all factors that may create such perception, as well as that of acts such as the financing, training, and infiltration of destabilising forces.

Protect and respect the rights and freedoms of the nationals of the other Party residing or transiting in their national territories, in accordance with the law of that country.

Resume as soon as possible cross-border activities between both countries, including the movement of persons and goods, for the development and improvement of the lives of their population.

These clauses, b), c) and d) are the crux of the matter, as everyone familiar with the current strained relations between Uganda and Rwanda knows. Those were the pressing issues that the heads of state, upon returning from Angola were to implement – with immediate effect as per the MoU.

But what was the first thing that happened upon Yoweri Museveni’s return from Angola?

The Uganda Communication Commission implemented a cyber war against the Rwandan media! It blocked the websites of all Rwandan news media so they can’t be accessed in Uganda. They had immediately violated the spirit of the Memorandum of Understanding, even before the proverbial ink on the document was dry!

This was obvious subversion. Kampala wanted Ugandans to consume only its narrative. It wanted Ugandans to see only the misinformation spewed by its propaganda media – including so-called mainstream newspapers like New Vision and Daily Monitor, and dozens of vitriolic websites and blogs like “Commandpost” Chimpreports, “ugandanz.org” and so many others – which Yoweri Museveni long ago weaponized as one of the instruments in his hostile stance against Kigali.

It is a stance he adopted after his decision to fund and facilitate Kayumba Nyamwasa’s RNC as a proxy group in a long-term plot to destabilise Rwanda.

All that is a matter of record.

Every propaganda organ in the Ugandan capital, either those taking dictation straight from State House, or those sponsored by Ugandan military intelligence, CMI, have waged a war of misinformation against the Rwandan leadership unlike anything else in the world.

But it is precisely when Rwanda and Uganda have just signed the all-important MoU that Kampala escalates anti-Kigali hostility by attempting to block Rwandan means to tell its side of the story in the face of a heightened onslaught of inflammatory falsehoods!

Obviously the leaders of Angola, DRC and Congo Brazzaville, and everyone else whom Yoweri Museveni assured he was going to carry out his part of the agreement are seeing this subversion. The Ugandan leadership is revealing itself to be completely impervious to any feelings of shame; of what it implies when you show yourself to be incapable of honouring your word.

But the undermining of the MoU did not end at the anti-Rwanda-media subversion. Even as he was doing that, the Ugandan ruler was reneging on his obligation to begin freeing hundreds of incarcerated Rwandan nationals in Uganda’s prisons, as well as in the torture dungeons and “safe houses” of the country’s security agencies.

In fact analysts think blocking the Kigali media, and reneging on releasing Rwandans – who number in the hundreds, including even old men, pregnant women, and teenage children that have never stood trial to defend themselves against any of the accusations of “spying”, “illegal entry”, or “illegal weapons possessions” hurled at them – all is part of one strategy.

Kampala and its RNC proxies want to keep the innocent Rwandans suffering and in jail – from where RNC targets the able-bodied to attempt to recruit fighters amongst them – while restricting Ugandan audiences from Kigali online media that obviously would expose Yoweri Museveni’s duplicity in this regard.

The media-blocking subversion also is part of another, wider strategy: to blame Rwanda supposedly for “not opening the border”. By now it is clear Yoweri Museveni’s only calculation in signing the MoU was to get Rwanda to “open the border”. After which – if Rwanda did what he (Yoweri Museveni) and his minions wanted, i.e. to allow heavy trucks from Uganda to resume entering Rwanda through Gatuna Border Post, while Kigali also lifts a travel advisory against Rwandan nationals crossing to Uganda – Yoweri Museveni simply would ignore his part of the deal!

He thought he would have his cake and eat it too, laughed a Kigali observer.

The Ugandan president somehow expected that Rwanda would go ahead to implement her part of the agreement as he kept the hundreds of illegally incarcerated Rwandans in his prisons confined, while maintaining ties to his RNC, FDLR, and “P5” proxies – as if the MoU that said he dismantle them did not exist, and as if he hadn’t signed it himself!

In fact, according to information this website has, recruitment for RNC in Uganda is proceeding like nothing has changed. Col. CK Asiimwe, Deputy Director of CMI in Charge of counter-terrorism is coordinating those activities together with Maj. Mushambo the UPDF Second Division head of counterintelligence operations, Mbarara. The Ugandan media never mentions such things.

But sure enough when Rwanda refused to be suckered into doing anything to open Gatuna to heavy Ugandan commercial trucks or to lift the travel advisory, the Kampala propaganda machine went into overdrive lambasting Rwanda. “Kagame has reneged on opening the border; he has violated the MoU!” shouted Commandpost, the CMI mouthpiece.

“Rwandans were still advised not to travel to Uganda even after presidents Paul Kagame and Yoweri Museveni agreed on Wednesday to end the tension,” moaned Daily Monitor.

“Several Ugandan traders who had hoped they would cash in with the immediate opening of the border remained stranded as Rwanda declined to open its side and allow to trucks from Uganda to enter through Katuna,” said the state-owned New Vision, making sure to create the impression everything was Kigali’s fault.

A lot of Ugandans were eagerly anticipating the “opening of the border”, many traders massing at Katuna, while bars as far away as Kampala advertised parties to celebrate the event, complete with lascivious photographs of supposed Rwandan women – an insult in fact to Ugandan womanhood with exploitation of the stereotype that only Rwandan females are attractive.

The Ugandans were shocked, and sure to be very frustrated upon learning that nothing was changing at the border, and that “it was all Rwanda’s fault”. Their newspapers and websites were drumming that into them 24/7.

“One can be sure this was part of the media strategy all along for Yoweri Museveni in case he didn’t get what he wanted from Rwanda – blame everything on Kigali!” said a Kampala analyst that requested anonymity so as to talk freely. “It was part of the plan to block the Rwandan media so no Ugandan reads about their leader’s negative role in the whole affair,” he added.

When Yoweri Museveni’s games became more apparent however, commentators in Kigali were unified on one point: whatever it does, Kampala can be certain without releasing the multitudes of Rwandans in Uganda’s prisons and torture houses, Rwanda will never just avail her market to their businesses!

“They can say what they want; they can gnash their teeth and pull out their hair, but without honouring their obligations to release innocent Rwandans from their gulags and dismantle RNC networks in their country they can completely forget the Rwandan market!” Mwene Kalinda a vocal Twitter commentator wrote.

“Yoweri Museveni is just joking,” said another commentator. “He seriously is fooling himself if he thinks Rwanda will cave in without him showing significant commitment on Rwanda’s demands.

“Release all Rwandans, and stop dealing with Kayumba Nyamwasa and his gang, nothing else will do!” exclaimed the analyst.