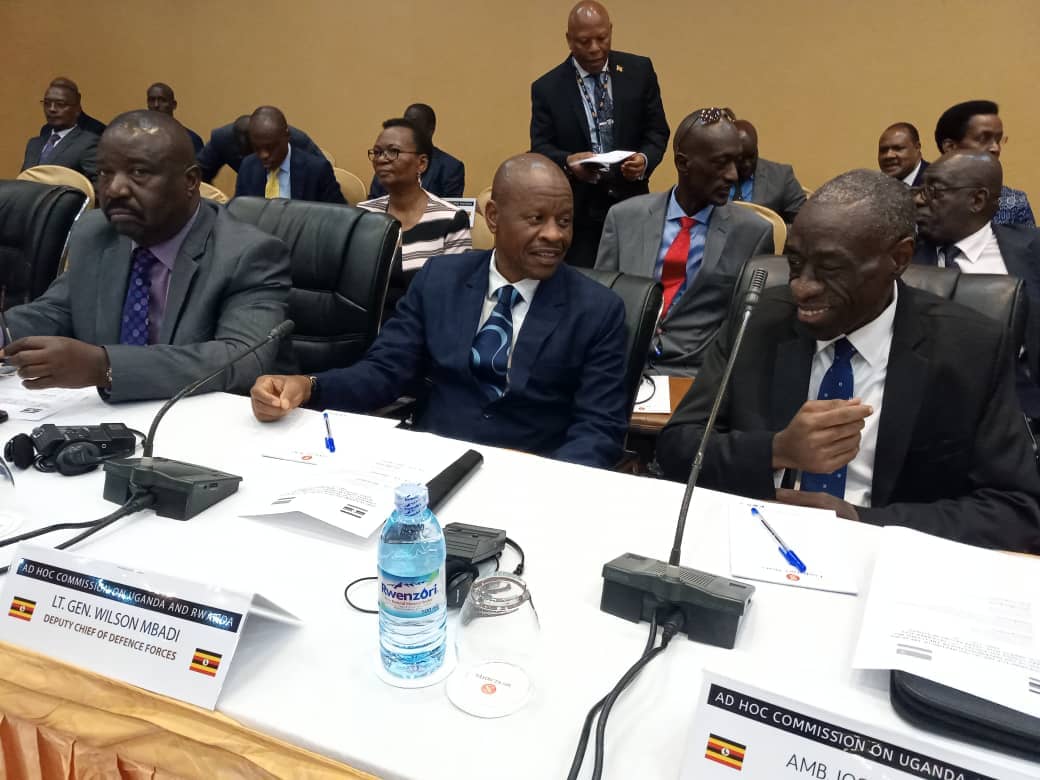 The latest round of talks between Rwanda and Uganda failed to reach a breakthrough on Friday in Kampala and representatives of the Ugandan government found themselves in an awkward position throughout the closed session. The Ugandan delegation simply had no answers to a compelling body of embarrassing evidence of their government’s hand in efforts to destabilise Rwanda, including a recent fatal attack by a militia group.

For Rwanda, the second meeting of the Ad Hoc Commission on the implementation of the August 21 Luanda Memorandum of Understanding between the two countries was a no holds barred moment. 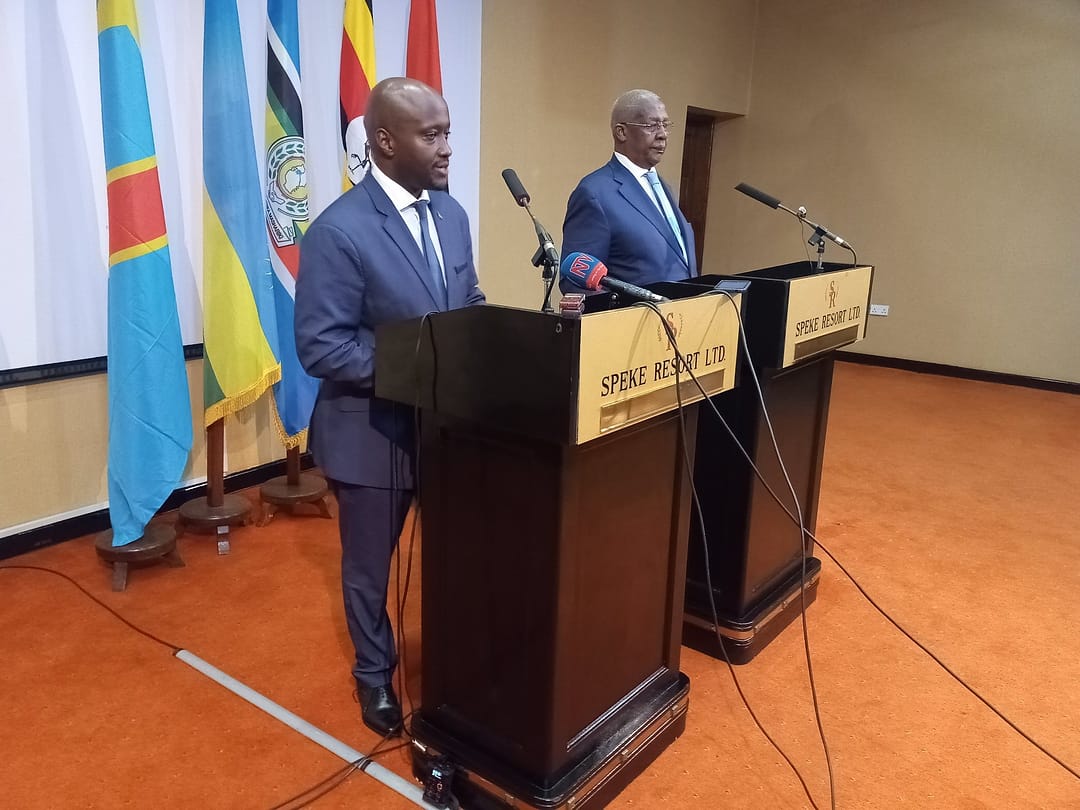 This was partly in keeping with the request of the facilitators – Angola and DR Congo – whose representatives had urged for an open and frank dialogue during the opening session earlier.

“Support to armed groups attempting to wreak terror on Rwanda, and illegal detention of Rwandans in Uganda has not ceased,” said Amb. Olivier Nduhungirehe, State Minister for East African Community, who led the Rwandan delegation to the talks.

“Operatives and leaders of these groups continue to receive facilitation and safe passage in Uganda, including by senior officials of the Government,” he said, in reference to a host of militia groups that have been linked with Uganda such as FDLR, RNC and RUD-Urunana.

In one shocking example, Nduhungirehe revealed that Uganda’s State Minister for Regional Cooperation was directly linked with the fatal attack on Kinigi in Musanze District by RUD-Urunana in October.

“During the night of 3rd leading to 4th October 2019, a deadly terror attack was carried out by a militia group known as RUD-Urunana, in the Kinigi sector of Musanze District, Northern Province.

“Many civilians were killed with machetes and hammers. The attack was launched from eastern DRC, close to the Ugandan border and the Volcanoes National Park. Most of the attackers were killed by our Forces. Some were captured alive. An assortment of material evidence, including phone handsets, and testimonies of captured attackers, was collected.

“One Ugandan telephone number appeared to have been in contact with the attackers both before and during the attack. And this number has been found to belong to Hon Mateke Philemon, Uganda’s Minister of State for Regional Cooperation.”

Following the attack, he said, three of the attackers fled to Kisoro District in Uganda “where they stayed briefly, then were evacuated to Makenke Barracks in Mbarara District and later transferred to the CMI (Chieftaincy of Military Intelligence) headquarters in Mbuya, Kampala.”

Rwanda’s High Commission in Uganda Frank Mugambage sent a note verbale to the government in Kampala on the issue on October 14, 2019 but there was no feedback to date, he disclosed.

“The Commander of the Special Forces of RUD-Urunana named Nshimiye aka Governor was in close contact with Minister Mateke. He lives in Kisoro District and often travels to Mbinza (in North Kivu, DR Congo) to organise his operations against Rwanda.”

Mateke did not attend the talks.

Nduhungirehe called on Uganda to cease what he called “unprovoked aggression”, adding “As we meet, there is hope among the people living along the northern, western and even southern border of Rwanda that they will eventually live in peace, without the fear of being attacked by terrorist groups, organised and facilitated by a neighbouring country.”

Nduhungirehe and his team also delved into cases of continued arbitrary arrest and illegal detention of Rwandan citizens in Uganda in violation of the Luanda framework.

“Indeed, since the signing of our agreements (Luanda MoU in August and Kigali Communique in September) over the past months, not only are hundreds of Rwandans still detained illegally in CMI jails and safe houses in Uganda, but others are still being rounded up and abducted.

“As an example, just two weeks ago, on Monday 25th November 2019, more than 150 Rwandan citizens, who were living and working in Uganda, were rounded up in Kisoro District, and a few of them – 33 – were dumped at the border deprived of all their belongings.

“The reason, as always, again, for this is because these people are Rwandan. This has been going on for too long and the questions that our compatriots ask ourselves are: WHEN will this end?”

“Beyond the continued support to armed groups and continued abduction, detention and torture of Rwandan citizens, there is also an escalation of hostile propaganda in the Ugandan media.

“I must say that by signing the Kigali Communiqué on 16th September 2019, Uganda and Rwanda didn’t intend to prevent media from critically covering this crisis, by using facts and their own analyses, whether we like them or not.

“However, we were disappointed to note once again that over the past months, the Ugandan media, including State-owned media, continued to spread demonstrably fake news against our country, against our President and against our Ministers, while praising our enemies.

“This is against the letter of the Kigali Communiqué and against the spirit of the Luanda MoU.”

A reliable source said, “The session became tense, the Ugandan delegation had no response whatsoever apart from just denying, as always, and in the process frustrating everyone.”

“Some of the Uganda-linked militia leaders and fighters were captured over the last few months by Congolese security organs, and Uganda knows that DR Congo (one of the facilitators), knows this well, let alone Rwanda,” said the source.

Among the senior militia figures arrested in DR Congo and later transferred to Rwanda for prosecution include two FDLR officials – Ignace Nkaka, best known as La Forge Fils Bazeye (spokesperson), and “Lt Col” Jean-Pierre Nsekanabo (head of intelligence) who were apprehended at the Bunagana border on their way from Kampala for a meeting with RNC officials.

It later emerged that the meeting in question had been chaired by Mateke, the same Ugandan minister linked to RUD-Urunana attack in October.

Accounts of Uganda’s role in recruitment for anti-Kigali militia groups have also been heard in courts in Kigali.

On Friday, Nduhingirehe had initially been scheduled to deliver his remarks during the opening session in the presence of journalists but a last-minute change on the agenda meant that his statement was delivered behind closed doors.

He later told the media during a joint briefing with Kutesa that Uganda’s support of anti-Kigali armed groups; abduction, illegal detention and torture of Rwandans by Uganda; and Uganda’s hostile media propaganda were “toxic” in the two countries’ relations.

Kutesa vehemently denied that Uganda supports any anti-Kigali groups and that they only arrest wrongdoers.

He accused Kigali of infiltrating Uganda’s security services saying this was a key factor behind the crackdown.  “We do not threaten the security of Rwandans, we only deal with those who have committed crimes or are a threat to national security but we commit to try and use due process in handling them.”

Many victims who have been dumped at the border with Rwanda have told of harrowing tales of torture and attempts to recruit them into armed Rwandan groups.

Some victims like Silas Hategekimana would later die from conditions linked to torture injuries, while hundreds of others are believed to be languishing in different torture chambers mostly run by Uganda’s Chieftaincy of Military Intelligence.

With the talks deadlocked, it was decided that both delegations would go back and consult with their respective Heads of State on the way forward.

Speaking to this reporter on the sidelines of the talks at Speke Resort Munyonyo on Friday evening, an Angola diplomat attending the talks said, “of course you always expect denials” in reference to Uganda’s stance.

Asked about Uganda’s insistence on immediate resumption of normal trade across the borders, the Angolan diplomat said, “As Rwanda has repeatedly said, it is impossible to talk of trade when traders and other citizens have no security.”