The Ugandan government’s levels of desperation in framing Rwanda nationals – so as to justify the latter’s harassment and mistreatment – has reached new levels with the Sunday Vision’s publication yesterday of a front page article with a screaming headline: “ARRESTED RWANDANS LINKED TO HIT SQUAD”. 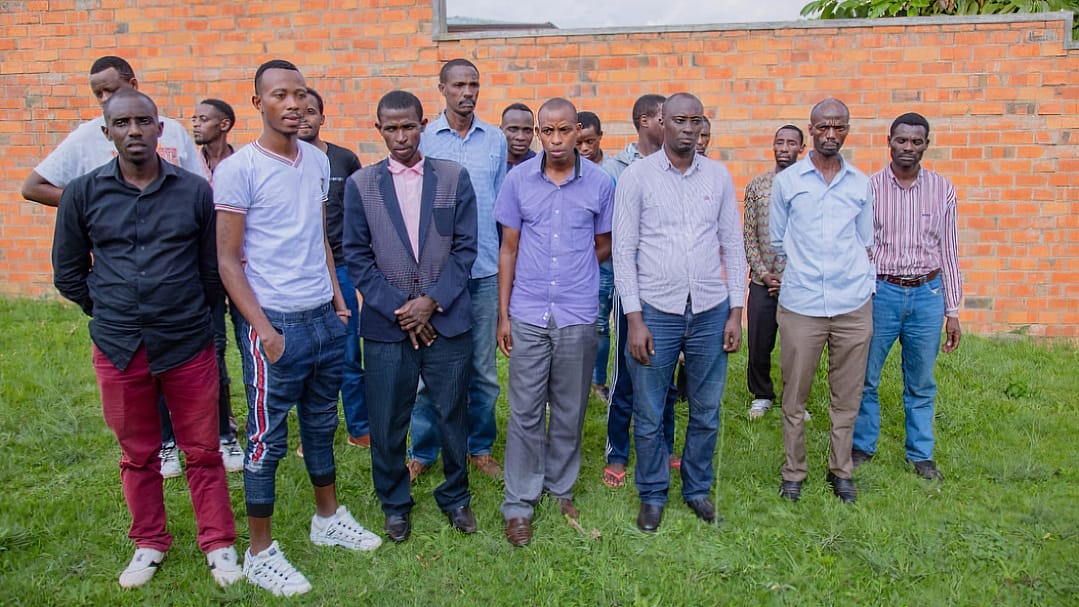 The article referred to the 40 members of the congregation of the ADEPR Church in the Kibuye neighbourhood of Kampala, that were caught in a CMI (Ugandan Military Intelligence) swoop as they were in prayer.

That happened on July 24, and the congregation included men, women and children.

The Sunday Vision wrote that “highly placed security sources revealed they (the Church members) were trailing some Rwandans in Uganda and others who live in other countries but visit their relatives.”

The paper added that the church members “were disguising themselves as Pentecostal believers, but were instead ‘trailing a renegade Rwandan army officer’.”

Analysts, both in Kigali and Kampala, wondered though what kind of spies would gather in such a large group – 40 of them – in one place, most especially in a foreign country.

“It stretches credibility to imagine such a thing happening; what kind of foolish “spies” would those be? It’s just impossible!” one observer said in a remark echoed by many on Twitter and other social media.

The raid on the church was conducted in the standard operating procedure of security agencies of the Yoweri Museveni government.

They just pounced on the church group and – with no arrest warrants, or any other legal procedure – ordered them into waiting vehicles, and took them away.

That kind of lawless abduction is what CMI, ISO and the others have been doing to Rwandans, most notably in the past two and a half years.

Almost invariably, not even family members will be told where their people have been taken.

Kampala regime accusations against Rwandan citizens all the time are mere concoctions to justify their victimisation, the record shows.

Today security agencies will be labelling someone as a “spy”; next week the accusation will change to “illegal entrant”; and another time it will be “illegal possession of weapons”.

According to observers, as per the Sunday Vision another concoction has entered the lexicon: “member of a hit squad”!

“It is a wonder that Ugandans have not yet died of embarrassment with the things their government’s agencies or institutions do,” said a Kigali-based analyst.

“How many times have these mouthpieces of Museveni declared that such and such people are ‘spies’, yet there never is a trial to prove it?

“Now look at this New Vision and how it is publicly tarnishing an entire church, calling them hit squads when no legal process has indicted them of anything!” added the analyst.

The government paper obviously has been taking its dictation from the very security agencies persecuting Rwandans, and its cues from high government officials, another observer commented.

It quoted the Uganda Government Spokesperson Ofwono Opondo saying, “The government of Uganda was not targeting but rather weeding out criminal elements within.”

Opondo’s words echoed those of Foreign Minister Sam Kutesa on 17 May this year when he addressed Kampala’s diplomatic corps when he said, “Uganda expects Rwandans who visit Uganda to be law-abiding. Anyone who breaks the law will be dealt with in accordance with the law.”

The administration of Uganda however has shown no Rwandan that broke the law. CMI abducted businessman Rene Rutagungira, a Rwandan national in August 2017 in the Bakuli neighbourhood of Kampala and accused him first of “espionage”.

In trademark bumbling by Kampala security agencies, they then changed the charge to “kidnap”. They detained Rutagungira in Makindye Military Barracks where he reportedly was badly tortured.

After several months in custody, and a writ of habeas corpus in court against CMI, they produced him in the General Court Martial, in violation of his rights as a civilian, according to the Ugandan Constitution.

But the court failed to convict him on anything. They decided to keep him locked up, in complete violation of the law which says anyone they have no case against is to be freed.

The cases of Rwandans that have been victimised in such a manner have been piling up.

He said they were “involved in a robbery plot.” Mukama Kandiho summoned the UPDF’s Second Division Counter-intelligence officer Maj. Mushambo and before they knew it, the two Rwandans were in the Mbarara Army Barracks suffering torture.

It so happened that Rwamucyo, according to his family members, had 140 million Ugandan Shilling, which he was about to deposit in a bank in Mbarara. The security men took the money.

According to international standards, upon arrest, any suspect should be searched and any material evidence found with him recorded. That never happened with the two businessmen, when it came to their money. It is the same with all other Rwandans abducted by CMI.

According to analysts, this is another reason Rwandans are never tried in court. The charges against them will be bogus, and there will be no evidence to charge them in court.

They will just torture them in CMI dungeons. Rwamucyo and Rutayisire would be transferred to CMI headquarters after some weeks in Mbarara, and by then the accusation had changed from “involvement in a robbery plot” to “illegal possession of weapons”.

The same happened to Moses Ishimwe Rutare, a Rwandan businessman in Kampala who in December 2018 happened to step out of a church service to answer his phone.

Unknowingly, he ambled next to the residence of Abel Kandiho where CMI men asked him to show his identity.

When it was discovered he was a Rwandan they whisked him off to their torture chambers in Mbuya, accusing him of “espionage”.

Rutare suffered inhuman treatment in Mbuya for two months, but when they released him, it was only to claim he was charged with “loitering”.

A similar thing happened to one Claude Iyakaremye, another Rwandan resident in the Ugandan capital.

They abducted, and accused him of “espionage”, only to change the statement to “illegal possession of firearms”. The man is still in CMI’s horror dungeons.

“It is beyond belief what Museveni’s people are up to really,” said a senior journalist in Kigali.

“No wonder Rwanda took the step to advise her nationals not to cross to Uganda again!”

The utter disregard of the law by the Ugandan security agencies is illustrated in the fact CMI has refused to comply with Uganda High Court orders to release innocent Rwandans in its custody.

This newspaper has in its possession copies of court orders to CMI to release twelve Rwandans, which the agency has ignored.

One such release order – on behalf of Vincent Habimana, a detainee – signed by Kampala High Court Judge Ssekaana Musa and addressed to Brig Abel Kandiho, among others, reads: “I, Justice Ssekaana Musa, on this 26th day of July, 2019, hereby direct, that the said Habimana Vincent be released immediately from the custody of the Uganda People’s Defense Force (UPDF) generally, and the Chieftaincy of Military Intelligence (CMI) in particular.”

Today is August 5, and Habimana still is in CMI detention. It is the same with the cases of the other 11 copies of whose release orders the media has seen.

In a new twist to the case of the 40 arrested ADEPR Church members, yesterday, Sunday 4, it came to light that CMI had – without making it public – released nine of them.

According to sources, it turned out that CMI had unknowingly arrested agents of Kayumba Nyamwasa’s RNC, who happened to be among the members of the church.

CMI had taken all of them, thinking they were usual innocent Rwandans they victimise with impunity, according to our sources.

“You can be sure that with Kampala being the headquarters of RNC, and a major centre of RNC recruitment something like this was bound to happen!” said the source who requested anonymity so as to speak freely.

“After they realised that some of the 40 people were undercover RNC people, they stealthily released them! Next, you will hear that some Rwandans have been dumped at the borders.

“You can be certain it is because they aren’t RNC members!” said our source, adding: “That is how criminally complicit Kampala has become with armed groups sworn to destabilise Rwanda.”