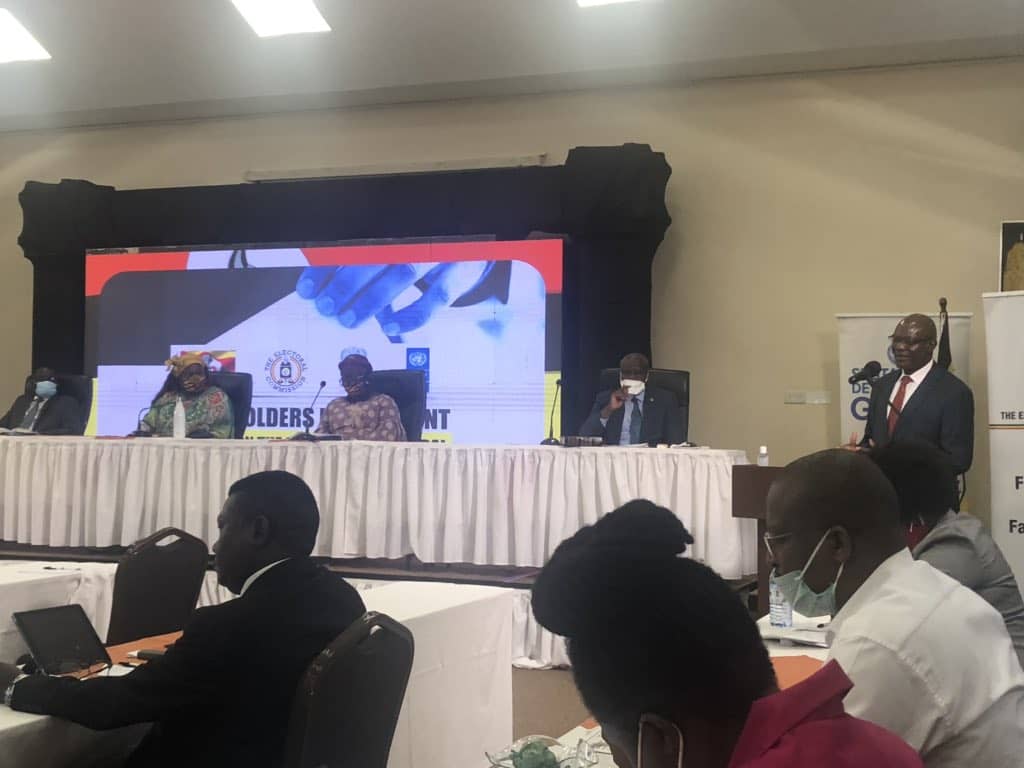 The chairman of the Uganda Electoral Commission (EC), Justice Simon Byabakama, has criticised what he called a culture of political intolerance in the face of the scientific election roadmap, saying this will not resolve the standoff ahead of the Uganda 2021 elections.

Justice Byabakama instead called on the opposition to bring forward realistic and tangible proposals that will see the country hold a free and fair election amid the restrictions over COVID-19. 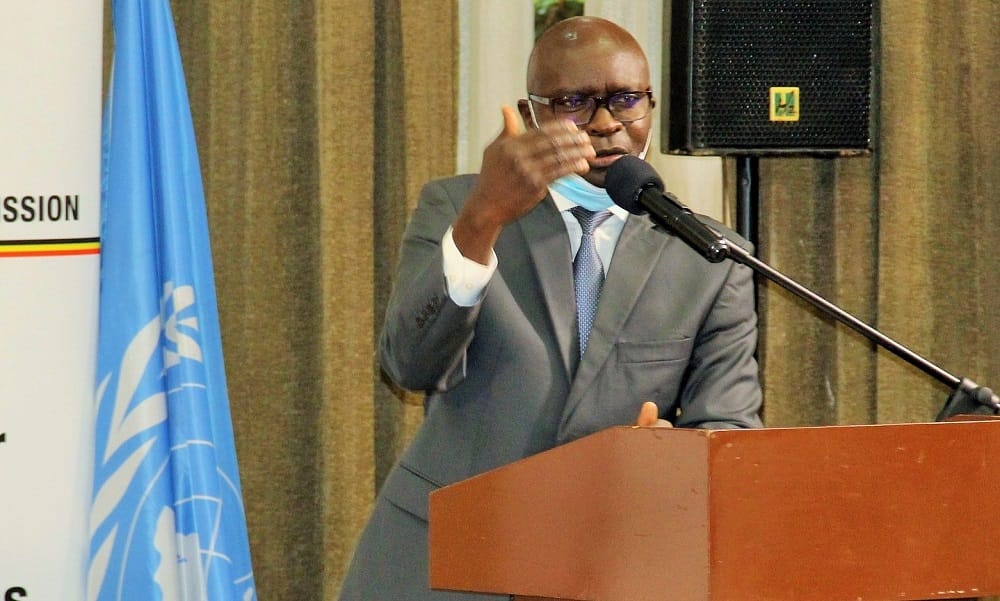 The EC has come under fire from different political parties for releasing a roadmap that bans political rallies and only allows virtual campaigns on radio, TV and other social media platforms.

But speaking at a stakeholder engagement meeting organised by the Uganda Electoral Commission with support from UN in Kampala on Thursday, Justice Byabakama insisted that what the EC did was in the best interests of the country and was the best option available.

“We are doing what is right instead of what is convenient. Bring tangible proposals that are realistic and achievable. Calling me Chemical Ali doesn’t help the people of Uganda,” he said.

Chemical Ali is a nickname of the much-feared former Iraq intelligence chief Ali Hassan al-Majid during the regime of Sadam Hussein.

“I have been around to witness some of the turbulent times of our country but at no time were we restricted from going to our worship places. Therefore, we should understand where the EC is coming from with the revised roadmap.  We are attentive to all proposals that will help with the implementation of this roadmap,” he added.

Justice Byabakama revealed that when the Electoral Commission launched the revised roadmap, they had to operate within the remaining period under the context of Article 61.

“That is why we called upon stakeholders to recognize that it is not the choice of the Commission to stifle party actives. We have to utilize the remaining time.  The health of citizens should be the most important and primary consideration. The implementation of this roadmap will substantially feature reduced human interaction,” he said.

However, retired Supreme Court Justice James Ogoola said while this is abnormal situation in the country, the EC should premise its decisions on democracy as articulated in the constitution.

“Elections under the constitution are predicated on the doctrine on free and fair, unrestricted interaction as well as the known hallmark of mass public rally at which candidates and the electorate engage each other.  I call it the Corona curtain. It is impenetrable in the way of elections. The elections are not about the EC. They’re about the electorate and candidates,” Justice Ogoola said.

“Are we then saying that we have elections at any cost, even at the cost of life? Or do we have alternatives? Where are we going? You get the idea that we are doing earthing to dodge the constitution. The whole country is indeed not breathing. Let people talk about the fundamentals and not the technicalities. ” he added.

Mr Dan Mugarura from the Alliance for National Transformation said: “When you’re looking at the constitution, you read it as a whole because one article feeds into the other.  If you are saying that Article 61 impedes any other activity expect to heed the election, then allow us as parties to see what the constitution mandates us to do like hold the delegates conference and more.

He added: “As political parties, we need to train our agents who will train others. Are you giving us a chance to carry out these activities? How do we solicit for signatures for nomination? Soliciting someone via media might not be very easy because people want to look at someone physically and evaluate them.”

Ms. Regina Bafaki said: “In the presentations and review of the roadmap, I noticed that there is no inclusivity. I’m hoping that moving forward, EC makes whatever they’re preparing gender-responsive. If we are to have these hybrid elections, there are many issues youth women and people with disabilities will face.

There has been a lot of violence related to COVID, how are we sure it will not escalate? We very well know about the politics of radio and TV usage at home. Are there plans by the Electoral Commission to help disadvantaged groups of people bridge the technology gap?”

DP president Norbert Mao said: “We are engaging because we want the EC to mind the gap between what is convenient and what is right. We might not close the gap but your willingness to engage is worth some praise.

Consultations should not be sporadic. We should have a joint forum. We note that over the last 2 decades, there has been an expansion over the world. Today, a whisper can be magnified all over all platforms due to the presence of the media. Democracy and the media are now more inseparable. Indeed, democracy has involved in a ‘mediacracy’. The vast network of communication traverses everything.”

Crispin Kaheru said: “EC should provide detailed guidance on how each election activity can be conducted inclusively but safely. Elections are not only about public meetings. Guidelines must cover nominations, campaigns, and polling processes. Can we have a clear and impartial oversight mechanism for the guidelines we adopt? It is not a matter of having guidelines, it is also about having the capability to monitor their implementation.”

UPC President Jimmy Akena said: “Of recent, we have seen the head of the Ministry of Health not abide by the guidelines that are not yet clear. We have endeavoured to do our politics in line with the guidelines but as we try and articulate our messages, there needs to be some level of cooperation.”

JEEMA Representative said: “The moment the EC went to State House for financial consultations with Yoweri Museveni, you watered down all your efforts. We are now skeptical. Museveni must have given you instructions to do what he wishes outside the interest of Ugandans. The EC has been absent without apology leaving voter education to civil society. The proposed revised roadmap is an emptiness in the face of limited consultations tailed at vote-rigging and incumbent recycling.”

“UNDP believes that elections are the means through which people voice their preferences and choose their representatives. Elections are, therefore, a powerful tool that can confer legitimacy on the institutions or representatives that emerge from them. These ideals are a critical element of the UN’s mandate and UNDP’s democratic governance work,” she said.

Ms Attafuah said UNDP is working with other agencies in the elections project, namely the UN Women, Office of the UN High Commissioner for Human Rights (OHCHR) and UNESCO and under the leadership of the Resident Coordinator, Ms. Rosa Malango.

UN Resident Coordinator Rosa Malango said; “COVID19 has brought an unexpected challenge to the world, it affects both the most established democracies as well as developing nations.  This is not only a health crisis but also a major socio-economic crisis that provides each nation with the opportunity to reassess its approaches to safety and security, humanitarian action, to sustainable development as well as to governance and human rights.

She urged the Electoral Commission to continue to apply these lessons and to share them with stakeholders as preparations continue for elections in early 2021.

“I implore all present to give dialogue a chance as the country embarks on an unfamiliar territory for conducting an election. The UN shall continue accompanying the Electoral Commission, political parties, civil society, insider mediators, and other stakeholders in this quest for credible and inclusive elections,” she added.