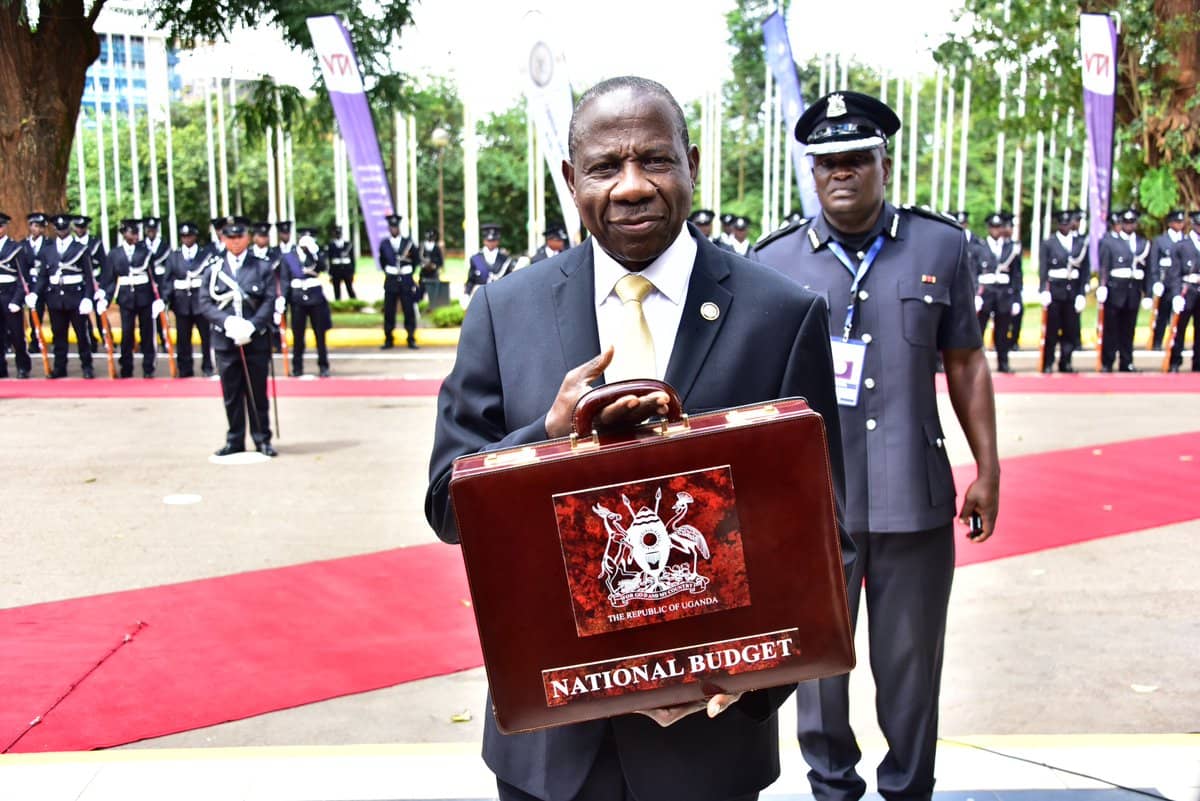 In accordance with Article 155(1) of the 1995 Constitution of the Republic of Uganda and Section 13(13) of the Public Finance Management Act 2015, I presented the Budget proposals for Financial Year 2019/20 to Parliament on 28th March 2019. I applaud Honourable Members of Parliament for their dedication in the reviewing the proposals and the approval of the Budget on 24th May 2019. 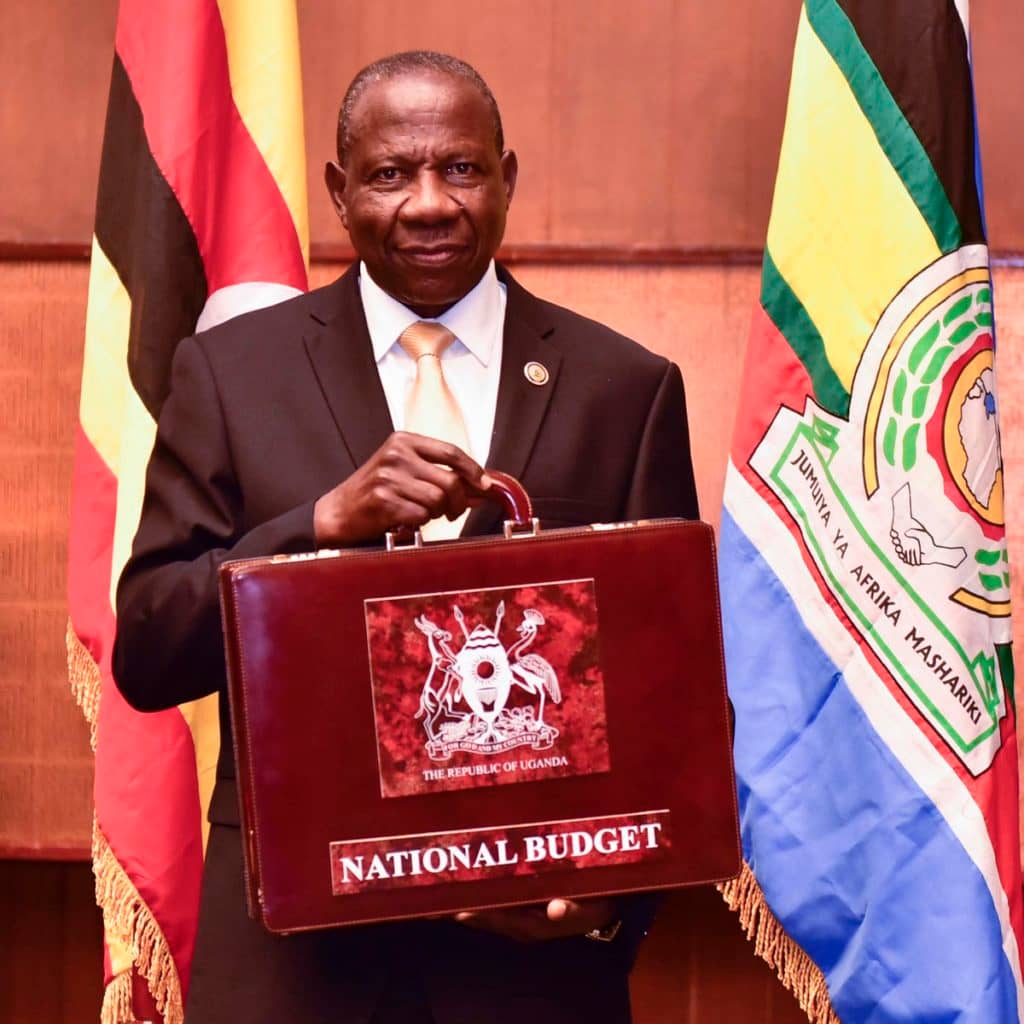 iii) The quality of Uganda’s labour force has dramatically improved, with the proportion of labour force with tertiary education increasing from 7.5% in 2013 to 13.6% in 2017. In addition, the annual growth in formal employment has averaged 9.8% between 2010 and 2017, higher than the average growth of the economy during the same period.

vii) National grid electricity connections have increased to 1.3 million customers, and the rural electrification access rate rising from 1% in 2001 to over 13% in 2019.

viii) Many new factories have been opened in the course of FY2018/19 with the result that the proportion of Ugandan products in supermarkets has increased from 15% to 45%. Our target is to reach 50% by the year 2020.

outcome of the NRM Government’s deliberate policies over the years to promote socioeconomic transformation.

Global and Regional Economy 14. Madam Speaker, on the global scene, Africa’s economic performance continues to recover. The EAC region is the fastest growing economic bloc in Africa, with growth projected at 6.2% in 2019, increasing from 5.9% in 2018. This performance is mainly accounted for by the growth in the services and agriculture sectors as well as increased consumption and investment. Rising incomes in Africa increases demand for exports within African countries themselves.

recovery witnessed in Financial Year 2017/18. The economy is estimated to have grown by 6.1% in the Financial Year 2018/19. The size of the economy is now Shs. 109 trillion, equivalent to US$ 29.5 billion. The significant revival in economic growth was a consequence of increased private and public sector activity, improved weather conditions and a relatively stable global economy.

Non-performing loans reduced to 3.4% at the end of December 2018 compared to 5.6% in December 2017. Private sector credit grew by 6.1% between July and December 2018 with Trade and Construction sectors receiving the largest share of credit, at 20.1% and 19.8%, respectively.

Credit to Agriculture has registered the highest growth, though it still remains low, at only 12.9% of total credit extended as at December 2018.

Expanding the Industrial Base of the Economy

inadequate electricity and transportation infrastructure, the lack of basic education and health, have, to a large extent, been addressed.

Consequently, the manufacturing sector is now able to meet domestic demand for basic products like cement, tiles, light steel products and consumables such as sugar and soap. The next phase of manufacturing in Uganda will be to produce goods for exports and also replace Uganda’s imports.

Because the majority of Ugandans are part of rural households, achieving inclusive growth requires that we use modern farming  practices, advanced agricultural inputs and technology, post-harvest storage, and improve product market access. This will positively change the livelihoods of over 68% of Uganda’s households who are currently engaged in subsistence agriculture.

IN addition, Product Value Chains permit inputs such as extension services and finance to be delivered. This approach will lead to an increase in sustainable production at the farmer household level, while increasing productivity and incomes. In addition, the approach will nurture agro-based industries across the country, employing labour that will have been released from primary agriculture.

(i) water shortage, or no water at all, for domestic use and production;

(iii) over-flooding and/or increasing landslides in highlands, and

(iv) destructive winds due to lack of windbreakers.

penalised through the enforcement of environmental laws and regulations.

Local Governments must enact and enforce ordinances on tree planting, efficient waste management and wetland conservation. The ban on use of harmful materials such as environmentally destructive polythene bags, among others, will also be unequivocally enforced. I appeal to the Private sector to adopt climate-smart technologies.

current level of development, the Tourism sector has made dramatic progress and now ranks as the highest foreign exchange earning sector. In 2018, foreign receipts from tourism reached US$ 1.02 billion, with 1.6 million international tourist arrivals being recorded. Uganda is now a known international touristic destination of choice, which strongly justifies developing its tourism potential for benefits it will provide to Ugandans in particular and the economy in general.

Affordable Financing for the Private Sector

bancassurance, Islamic banking, and enhanced access to Credit Reference Bureau services, will reduce operational costs of commercial banks. The use of movable assets as collateral for loans has also been facilitated with the enactment of the Security Interest in Movable Property

Enablers of the Growth Strategy

iii) Reform Technical and Vocational Education and Training (TVET) to provide the skills required in the job market;

Construction of the major irrigation schemes have progressed and are at different stages of completion- Doho II in Butaleja (48.6%); Mubuku II in Kasese (22.5%); Wadelai in Nebbi District (18.2%); Torchi in Oyam District (57%); Ngenge in Kween District (54.1%); and Rwengaaju in Kabarole district (50%).

vii) Continue enforcement of rules and regulations on major water bodies to prevent over fishing and promote sustainable capture fishing and aquaculture.

iii) Uganda Tourism Board participated in 8 expos and 14 events in the international, regional and domestic markets.

iii) Destination marketing to identify and sell key tourist circuits such as Kidepo, Bwindi, Kibale and products including Historical sites like Fort Patiko, and Bigo Byamugenyi.

infrastructure, and highway stopovers along the tourism routes.

(iv) Development and Commercialisation of Minerals, Oil and Gas

The Lead Investor for the Oil Refinery commenced detailed designs that will inform the Final Investment Decision (FID) to be taken in September 2019.

The detailed designs for the East African Crude Oil Pipeline (EACOP) were completed and First Investment Decision is due to be taken after negotiations of final agreements.

These are the African, Simba and Bullion Gold Refineries. The Sukulu

Phosphate and Steel Project first phase to process fertilisers was commissioned in October 2018. The Sukulu Project’s steel, glass sheet, brick and cement plants are due for commissioning in July 2019.

iii) The exploration of the 18 priority mineral target areas for rare earth, and metallic minerals to a level of certified mineral resource

the way forward in the transport and energy infrastructure, and I will therefore present highlights in this area.

the national paved road network and 83% of unpaved roads were reported to be in fair to good condition. This was above the NDP II target of

Kakumiro – Mubende has been fully provided for in the Budget, while loan negotiations for the Construction Works are being soon concluded.

State of the Nation Address.

hydro power projects will be developed in the medium to long term, in partnership with the Private Sector.

automated, 71 of these being provided online. The automation of Government services has led to a reduction in processing times and an improvement in service delivery.

both in Government and the Private Sector.

(i) Education, Skills Training and Sports

Traditional secondary schools of Kyenjojo, St. Balikudembe Mitala Maria, Kigezi College, Sir Samuel Baker and Ntare School were extensively rehabilitated. Teacher absenteeism at UPE Schools in 20 pilot districts has reduced from about 15% in 2015 to 4% in 2019 with the use of biometric finger print readers.

The specialised Regional Centre for Paediatric Surgery Hospital is under construction in Entebbe and will be commissioned by December, 2019.

Kawolo General Hospital has been rehabilitated and will be commissioned in July, 2019, while the rehabilitation of Busolwe Hospital will commence next financial year. These projects will also address reproductive health, in addition to provision of Emergency care.

This is in line with the NRM Manifesto of having a Health Centre III in all the sub-counties.

financial year and the medium term:-

iii) Continue to strengthen anti-corruption institutions, policies and systems in order to crackdown on corruption in public service, minimise fraud and money laundering and financing of terrorism in the country.

vii) Fast track implementation of Safe City infrastructure by rolling out installation of CCTV to municipalities and urban centres.

viii) Reduce Prison congestion by internationalising Kitalya mini-max prison; and 5 other reception centres. The National Community service programme will also serve as an alternative to incarceration, and

iii) Complete the rollout of the Integrated Financial Management System (IFMS), Treasury Single Account Framework and the e-cash solution to all Government departments, at Local Government levels, to enhance efficiency, transparency and accountability.

iii) Promote an attractive business environment to potential investors, including the provision of a business-friendly tax environment, and eliminating distortions to private sector investment decisions

iii) Withholding tax on long term bonds has been reduced from 20% to 10% to encourage investment in long term Government securities but at the same time reduce financing costs to Government.

vii) To promote investment and industrialisation, import tariffs on products which are locally manufactured have been increased.

Budget Deficit and its Financing

iii) Apply more stringent vetting of projects to be financed by loans, including prioritising only projects that enhance the productive capacity of the economy, demonstrate high economic returns, and help generate future growth.

I call upon farmers to cooperate and participate in the process of agro industrialisation in order to fully benefit from higher rewards to their efforts.

This will enable households to improve production and productivity. As a consequence, incomes will rise, and new jobs will be created. This will lead to sustained growth and development of this beautiful Uganda.