According to Peter Woods-ford when he arrived at Busoga College Mwiri in August 1963 for a one year posting with Voluntary Service Overseas (VSO). This was the first year that VSO sent out graduates in significant numbers – there were I think ten of us and I was the only male! We had had a very general orientation weekend in London and then were off to Entebbe on a Comet 4 (a
lovely plane) via Benghazi and Khartoum. I had just finished a mathematics degree at Cambridge, having done my secondary education at Weymouth Grammar School, a coeducational state day school on the south coast. 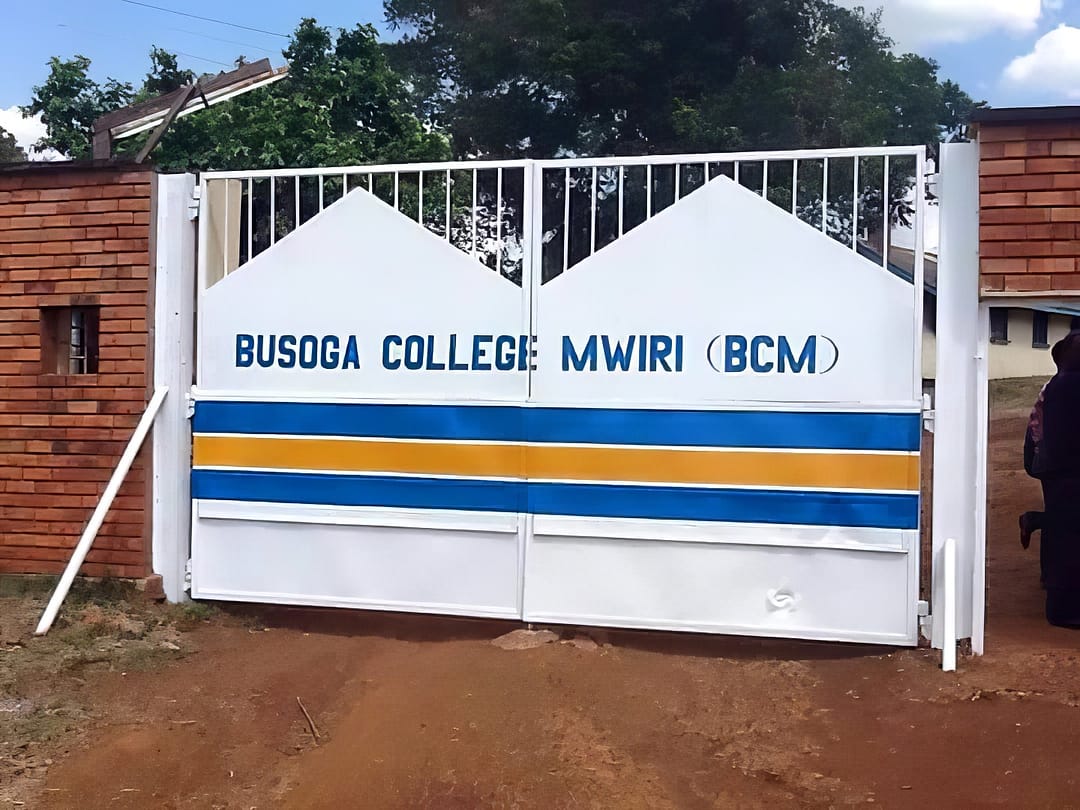 The situation at Mwiri, and in Uganda, was very interesting. Independence had been achieved less than a year before. Indeed, one of the first external events I remember is the First Anniversary celebrations at Jinja, with a march past of local organisations headed by the Mwiri contingent (with Head Prefect Mwanja Magezi to the fore) and the band of the Uganda Army still looking very much like the 4th Battalion of the Kings African Rifles.

1. Mwiri was founded in 1911 by Church Missionary Society, a group of Anglican Missionaries, and is the oldest school in Jinja and Eastern Uganda, it is however, sixth oldest in Uganda, after Mengo SS -1895, Namilyango-1902, Gayaza High-1905, Kings College Buddo and SMACK 1906?
2. Reverend W. B. Gill, was the first Headmaster of Mwiri in 1911
3. Mwiri was previously located in present day Kamuli District until the late 1920’s when it was shifted to its present location because of swampy conditions in Kamuli
4. Between 1920 and 1931, with Rev H A Brewer at the helm, the school opened up to commoners
5. The School was previously called BALANGIRA HIGH SCHOOL, as it was meant for sons of chiefs, later changed to BUSOGA HIGH SCHOOL in the 30’s, and then again changed to BUSOGA COLLEGE MWIRI, its present name.
6. The period between 1943 and 1965 is usually referred to as the ‘GOLDEN AGE’ under Rev Coates, the school was the best performing in Uganda
7. YOWERI MUSEVENI has come to Mwiri at THREE TIMES, once as a Ntare Student for a Scripture Union event in early 1960’s, during the Presidential election campaigns of 1980 and in 1991 when he laid the foundation stone of the GW KAYONDO COMPUTER CENTER
8. The name “Mwiri” is actually a corrupted version of the Muyili, the name Basoga referred to the hill
9. Mwiri was once temporarily housed at KINGS COLLEGE BUDO BETWEEN 1930 and 1933, as construction of the current school structures at the hill was ongoing
10. Mwiri sits on 300 ACRES of land, making it potentially the BIGGEST SCHOOL in Uganda, in in terms of land area.
11. Uganda’s Motto, “FOR GOD AND MY COUNTRY” was borrowed from Mwiri’s motto “KULWA KATONDA N’EGWANGA LYAFFE.” It’s believed that its Obote who influenced this move
12. It took 400 Men to clear the heavily forested Mwiri Hill in 1930 under the guide of Charles Girling to pave way for construction of school structures.
13. The pond colloquially referred to as NADIOPE POND, commonly associated with scary stories and spirits was actually once a SWIMMING POOL built by Rev Coates.
14. YOSIYA NADIOPE, great grandfather of current Kyabazinga, gave land to Anglican missionaries to construct the school at its first location in Kamuli. Yosiya is believed to be the FIRST CHRISTIAN CONVERT IN BUSOGA, was tipped to be first Kyabazinga. He died of malaria in 1913 aged 23 before he could be enthroned
• NADIOPE HOUSE is named after him
15. The longest serving Headmaster of all time was HG JACK COATES, he served for 22 YEARS, from 1943 to 1965. He was also appointed a Busoga Chief. He died in 2004.
• COATES HOUSE built in 1980 is named after him.
16. HARRY BREWER served as headmaster in 1920’s for 10years, he lobbied hard for the school to be relocated from Kamuli, but died of black water fever before it was.
• BREWER HOUSE is named after him
17. BISHOP JAMES HANNINGTON was the first Anglican Bishop to Uganda, he was murdered in 1885.
• HANNINGTON HOUSE is named after him, it was opened by his daughter in 1959.
18. The first head prefect of Busoga College Mwiri was M.L. MULWANYI in 1934. The students had just been relocated from Buddo
19. EZEKIEL TENYWA WAKO, the first Kyabazinga of a united Busoga (father of late WAKO MULOKI), enthroned in 1939, played a key role in helping Mwiri attain its current location.
• WAKO HOUSE is named after him.
20. RT REV JOHN JAMIESON WILLIS was the first Anglican Bishop of Uganda. He served as Bishop between 1912 and 1934. He helped o lobby for funds to construct the school.
• WILLIS HOUSE is named after him
21. Mwiri has had only 29 headmasters in its 105 years history (The first twelve up to 1965 were white)
22. REV C.T. WILSON, along with Rev Shergold Smith were the first ANGLICAN MISSIONARIES to arrive in Uganda in 1877, Wilson contribution to education (particularly building schools like Mwiri), health and religion in Busoga was very immense.
• WILSON HOUSE is named after him
23. NABIKAMBA HOUSE – is named after one of the founding Busoga chiefs.
24. PRESIDENTS HOUSE – is named after the Presidents of the Busoga governing council of chiefs The Lukiiko.
25. MWIRI AND WANYANGE were once temporarily under the same administration in the 50’s
26. IN 1967 Mwiri Old Boys Association blocked a proposal that would have seen WANYANGE GIRLS and MWIRI MERGED into one school
27. All students of Mwiri, were ferried to witness the opening of Owen Falls Dam on 29th April 1952.
28. Mwiri did not have A LEVEL until 1964.
29. DAN. N. OKUNGU was Mwiri’s first black headmaster in 1965
30. From 1911 to the 20’s students were made to engage in COTTON, COFFEE AND RUBBER production to raise finances to support the school
31. In 1971, Amin’s soldiers attacked Mwiri, killed several students, tortured and publicly executed the then HM Y.Y OKOT. Amin hated Mwiri because it was President Obote’s former school. Attacks on the school continued through the 70’s
32. In the 1911 fees at Mwiri was only 50 Rupees or about 4 British pounds.

33. With spectacular views of Lake Victoria, Bugembe, Jinja town and the lash Kakira Estate, Mwiri is believed to have the best scenery in Uganda
34. Mwiri got its first ever FEMALE TEACHER in 1935. She was a white
35. Roll Call in Mwiri used to be called “WAMPA”
36. NOAMI LUKUNGU is the longest serving staff at Mwiri. She was a nurse at Mwiri for close to 50 years, A lot of Mwiri’s prominet OB’s passed through her hands including, They include; former President Dr Apollo Milton Obote, Prime Minister Dr Ruhakana Rugunda, Speaker Francis Ayume, Speaker Alex Waibale, Deputy Speaker Eli Nathan Bisamunyu, Deputy Premier Alhaji Kirunda Kivejinja, Deputy Prime Minister Hon Paul Etiang, Owek Kaya Kavuma, Chief Justice Wako Wambuzi, Chief Justice Egonda Ntende, Supreme Court Judge Prof George Kanyeihamba., Dr Philmon Mateke, Dr Luwuliza Kirunda, Dr Okullo Epaka, Dr Peter Otai, Dr James Rwanyararare, Dr Ibanda David Dr GW Kafuko, Dr Sam Kadama, Dr AK Oteng, Dr Mutende Shinyabulo. Etc. SHE DIED IN MARCH 2016 AT 104 YEARS
37. Mwiri has a record 16 SCHOOLS CRICKET TITLES, this is more than all the titles of other schools combined (4 titles ) making Mwiri the greatest Cricket school of all time in Uganda
38. Mwiri is located on the HIGHEST HILL in Jinja and probably is on the highest elevation in Uganda
39. All the first 12 HEADMASTERS (between 1911 and 1965) of Mwiri were WHITE ANGLICAN REVERENDS
40. At one time, MWIRI was completely surrounded by forest
41. The First Asian student on Mwiri Hill was RAVAL. He joined in 1966, and stayed in WAKO
42. At over 90 years plus, MPALA MAGAZINE,-(the schools regular publication), is the oldest continuous publication in Uganda
43. Mwiri has never had a female Headmistress
44. The iconic MAIN HALL at school was opened in AUGUST 1940
45. At one time Mwirians were proud and choosy about which schools they went for seminars. They selectively went for schools in their league which comprised King’s College Budo, Mt St Mary’s College Namagunga, Nabisunsa Girls School, St Mary’s College Kisubi, Namilyango College and Gayaza High School. The same principle was applied for ‘social’- the Ugandan version of prom.
46. Despite its recent decline, Mwiri has earned its place in the hall of fame as a school among the 6 greatest of all time alongside Namilyango, Gayaza High, Kings College Buddo, SMACK, and Namagunga,
47. Busoga College Mwiri is older than MAKERERE UNIVERSITY by 11 YEARS
48.Mwiri has a record of having the most unique uniform in Uganda, all white in O Level, although later it was copied by Kiira College Butiki
48. Mwiri has produced
• A President
• A Vice president
• Two Prime Ministers
• Two Chief Justices
• Three supreme court judges
• Three Speakers of Parliament
• Two deputy speakers of parliament
• Five University Vice Chancellors
• Uganda’s first engineer
• Three Kyabanzingas
• One Toro Omukama
• 30 plus Members of Parliament
• Over 10 cabinet Ministers
• Over 15 state ministers
• 100 plus doctors
• 100 plus professors
• 1000’s of several prominent Ugandans